Shipments are potentially liable for sales tax, dependent upon 'Ship to' address.

CEDAR Studio 8 is the latest incarnation of the award-winning CEDAR Studio suite of plug-ins.  Derived from the flagship CEDAR Cambridge system, CEDAR Studio allows users to eliminate a wide-range of noise problems and provides unsurpassed results quickly and with the minimum of fuss and user intervention.

Available as a range of AAX, VST2, VST3 and AU plug-ins (as well as offering a standalone version of Retouch™) for Windows 7 onward and OS X 10.9 onward, CEDAR Studio 8 comprises eleven advanced processes that allow you to eliminate a wide range of common problems and significantly improve the sound quality of your audio. Each CEDAR Studio 8 process has been derived from our multi-award-winning CEDAR Cambridge™ flagship, and provides unsurpassed results, quickly, and with the minimum of fuss and user intervention.

The world’s standards for dialogue noise suppression in film and TV post, DNS One and DNS Two offer the Academy Award® winning noise suppression of the DNS1000 and its successors, but adds CEDAR’s unique LEARN capability that allows the processes to adapt continually to changes in the noise, even when the wanted signal is present. They make unusable interviews intelligible, save huge costs in ADR, and have rescued dialogue for countless movies. In the words of one member of the Academy of Motion Picture Arts and Sciences, DNS was “probably used on every major movie coming out of Hollywood in the past couple of years”, and can now be found on virtually all dubbing stages worldwide.

If you work with film dialogue, the speed, flexibility, and ease of use of DNS One provides solutions to audio problems that you could not previously solve. It’s the standard for multi-channel post-production in the film, video, and TV industries. It’s also ideal for removing motor noise from recordings, for eliminating electrical interference, and for helping to clean up recordings suffering from unfavourable acoustics and poor microphone locations.

A huge success within the DNS 2™ hardware unit, the newly developed algorithm in DNS Two has already proved to be the quickest, simplest and most effective dialogue noise suppressor ever developed. In almost all cases, using DNS Two is as simple as switching on LEARN and then adjusting the attenuation to obtain the desired amount of noise reduction. If you’re working with location sound recordists and studios who use DNS 2s, DNS Two will allow you to replicate their work precisely and fine-tune the audio for the best possible results.

CEDAR has led the world in audio restoration since the 1980s, introducing features and capabilities that many claimed were impossible before we released them. Real-time digital declicking and decrackling? A CEDAR ‘first’. Digital noise reduction without a fingerprint? Also invented by CEDAR. Noise-free equalisation? Sub-sample phase/time correction? Spectral editing? All of these were researched, developed and released first by CEDAR.

Today, we have combined eight of your favourite restoration processes into a single package: CEDAR Studio Restore. This allows you to remove a huge number of the problems that you’ll encounter, whether you’re transferring audio from old and damaged media, cleaning up soundtracks for film and TV, restoring material for broadcast, and much more.

Eliminate clicks with the minimum of fuss

Declick offers better impulsive noise detection and a better interpolator than any other plug-in declicker. This results in superior performance across a wider range of material than ever before. Indeed, this performance is so good that, in most cases, it’s not possible to hear that the signal was damaged prior to restoration.

Dig deeper to eliminate crackle and other problems

Decrackle boasts a remarkable ability to dig into the damaged signal to identify and remove all manner of ground-in and grungy crackle without damaging the wanted audio. It also removes many forms of buzz and some amplitude distortions from material ranging from cylinder recordings to current broadcasts contaminated with lighting buzz.

Manual Declick is ideal for restoring the extended scratches and clicks encountered on many audio media – film, tape or disk, whether analogue or digital. Its unique dual algorithms – optimised for long clicks and scratches – will remove noises such as those found on optical soundtracks, as well as drop-outs and extended digital errors.

Dethump eliminates the extended low-frequency thumps that cannot be restored using conventional declicking processes and filters. It replaces the unwanted sound with restored low frequency audio and is the ideal tool for removing many of the previously intractible problems associated with optical soundtracks, cylinders, 78rpm discs, and even modern recordings when, for example, microphones and stands are bumped.

Auto Dehiss embodies an advanced algorithm that is far less susceptible to the unwanted side-effects sometimes called twittering, glugging, the ‘underwater sound’, and even ‘space monkeys’. In short, it’s able to determine the broadband noise content and remove it without the introduction of these unwanted artefacts. A manual mode is also offered for fine-tuning the results when wanted.

Debuzz quickly and easily removes all manner of buzzes and hums with fundamentals as high as 500Hz, and it can eliminate unwanted signal components across the entire audio spectrum. It will track wandering tones and, unlike traditional filters, can successfully restore the audio without unwanted side-effects such as limited bandwidth or the hollow sound introduced by comb filters.

Declip 2 effortlessly removes clipped samples and reconstructs the original signal, improving clarity, eliminating distortion, and restoring the original dynamic range of the damaged audio. Our latest algorithm even tracks the clipping amplitude so that material that has later been processed with dynamics packages can still be restored.

Adaptive Limiter employs another unique algorithm developed by CEDAR that constrains the peak level of the output while retaining the integrity of the input. The result is a perfectly controlled signal that remains much more natural than audio processed using other limiters. It is also an unsurpassed loudness maximiser and, with its advanced resampling and noise shaping capabilities, is ideal for mixing, final mastering and other creative duties. 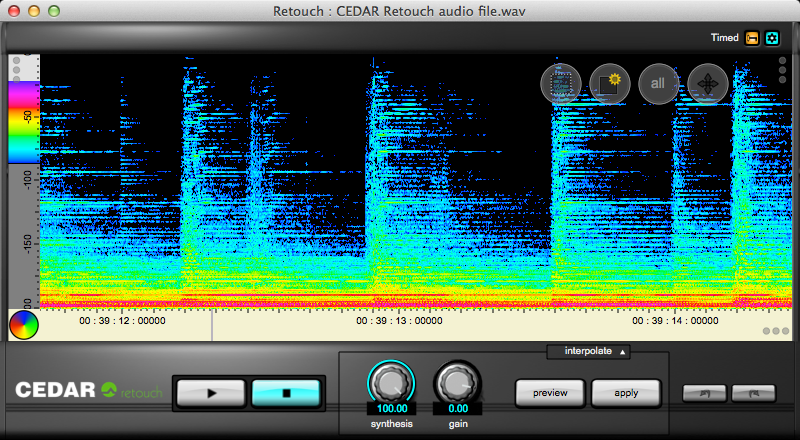 Nowadays, we take spectral editing for granted, but it’s a relatively recent invention, first seen in 2002 when CEDAR patented the underlying technology and announced the first version of Retouch. It’s not an exaggeration to say that it changed the mastering industry and, today, it’s quite likely that you have access to some form of spectral editing manufactured under licence from CEDAR.

Unlike conventional tools, Retouch allows you to define the temporal and spectral content of the sound that you want to manipulate using the types of tools commonly found in photographic image manipulation software. Once identified, those sounds can be manipulated using any of the numerous tools at your disposal; Interpolation (to suppress or remove unwanted sounds) as well as Copy, Patch, and Delete tools, a Volume tool that allows you to listen to just the marked sounds (or everything but the marked audio) plus powerful new Cleanse and Revert tools.

So why should you choose Retouch? It’s because it does the job better than anything else, providing clinical and seamless repair of otherwise intractible problems without leaving behind (or, for that matter, introducing) unwanted artefacts. With its slick user interface and enhanced processing capabilities, Retouch stands alone as the spectral editor of choice for the top mastering studios, mix suites, post houses, forensic laboratories, and anyone else who needs to be able to identify, isolate and manipulate individual sounds within an audio file.

“”The Gold Standard against which all others are judged” – Resolution magazine

Containing all eleven processes from CEDAR Studio DNS™, CEDAR Studio Restore™ and CEDAR Studio Retouch™, CEDAR Studio Complete is the most advanced plug-in suite available for noise suppression and audio restoration. It will eliminate your impulsive noise problems – clicks, crackle, and thumps – remove background noise, reduce hiss, and eliminate hums, buzzes, and clipping distortion. It will also allow you to remove individual sounds, correct wrong notes, and much, much more. Finally, to prepare your track for its intended purpose, its unique Adaptive Limiter is ideal for mastering and maximising.

There are no reviews yet.

Only logged in customers who have purchased this product may leave a review.